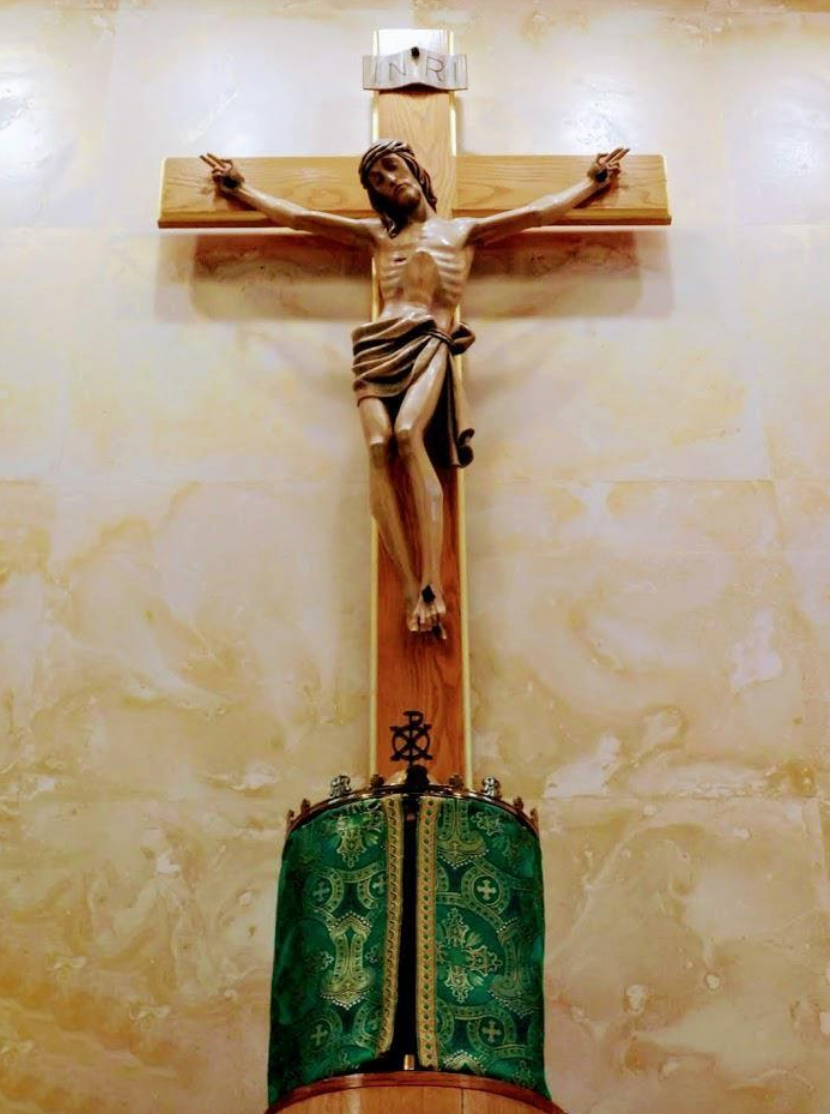 During this lockdown and time of isolation, it’s easy to feel like this is a unique experience, that this is an “unprecedented time.”  However, over 100 years ago, something similar happened in fact: in 1918 during the Spanish Flu, churches were temporarily shut down in Birmingham, Alabama.  The Birmingham news invited many religious leaders to address their people through the newspaper and the pastor, Rev. James Coyle of  St. Paul’s Church (Cathedral) took this opportunity to say, “You are for the first time in your lives deprived of the opportunity of hearing Mass on Sunday, and you will, I trust from this very circumstance, appreciate more thoroughly what Holy Mass is for the Catholics.” This is true for us today and it seems even separated and solitary there is a loudness going on, everyone wants to be heard with varying perspectives on how to “deal” with our current situation.  I am amazed at how we are adapting for good, but we yearn for and in some cases demand our old lives back.  I hear a lot, let's get back to normal, let’s open this, we can’t cancel that!   What I hope is that we are using this solitude to listen to God and really hear what is being said to us.
In the Church, the time after Easter is the time of Mystagogy.  Mystagogy is such a strange word.  The first time I heard it was shortly after the Easter Vigil when I had converted into the Catholic Church from Protestantism.  I reflected on my new Catholic faith and I found myself a bit overwhelmed by what I didn’t learn yet or was continuing to learn daily as a new Catholic and how I  was never going to learn it all...that is Mystagogy.  It is a season to listen more, to be fed, to grow in faith.  In the epistle reading for this Sunday, I Peter 2: 4-9, the early Christians were introduced to a two step process of growing in salvation by stripping their old selves away and through spiritual nourishment (I Peter 2: 1-3), but the next reading changes to structural integrity of our growth.  We cast our old selves off; we are nourished and now we are “being built” (I Peter 2: 4-9), and built for something more.  By virtue of our baptisms, we are unified to the Church and all of the covenants that God had with Israel are ours, we are His and He feeds us spiritually and physically.

During this current time priests have made Masses available through social media, websites, and other platforms, there have been “outdoor confessions” or socially distant confessions and some churches are open for prayer (sanitize your hands if you go), but as Catholics it doesn’t quite satisfy because the Source and Summit of our faith is the Eucharist.  Even in 1918 they knew the yearning when Father Coyle said “Mass is God really and truly present on our Catholic altars, a living unbloody victim offered again for the sins of men, offered, too, in thanksgiving for all the wondrous graces that unceasing flow from God’s great mercy throne on high.”  We need to understand that this isn’t the first epidemic or struggle the Church has gone through; each age has posed it’s own dilemma and people have been without the Eucharist before.  Moreso, these struggles cause a growth in the Church in some way.  We see this in the first reading for Sunday (Acts 6:1-7): the very new Church was in a state of restructuring and they needed to assess the needs of the people and so they asked for seven new men to join in the efforts, which became the early stages of the Diaconate. We are all called to apply ourselves in prayer, work, and intentions to build a better Church with Jesus as the Cornerstone.

Being away from each other and Jesus is not ideal obviously, but neither is the potentially fatal disease that befalls our frail humanity.  If we remind ourselves of this frailty, we can focus on how God wants us to grow during this Mystagogy.  It was Christ who took on this frail form while remaining part of the Divine Trinity and, when we think of how Christ allowed that human frailty to be a part of Salvation History—that beaten, bloody and bruised image we see on the Crucifix—only to show his Divinity in his Resurrection at Easter, then we understand His true nature.  The Father worked through Him from the beginning, He became man with us, He is with us now in the Eucharist, and all the while, His Kingdom, His Church is being built.  We are not heirs because we receive the Eucharist, we are Heirs because we are His Children, we are fed by his Body and Blood in the Eucharist and it is good to feel that hunger.  Jesus tells the disciples in Sunday’s Gospel reading, John 14:1, “Do not let your hearts be troubled...have faith.”  Jesus continues to identify His divinity and humanity in this passage as he explains his place within the Holy Trinity and yet he identifies specifically His presence with His people.  With the fulfillment of Easter we as Catholics know that the fullness of His testament at the Last Supper is given to us at every Mass.  But for right now, temporarily we are away from that which we hunger.

“Yes, the Mass is the center of Catholic worship. It is the Mass that matters. Where the Mass is, there is God Himself, really, truly, though under sacramental veils,” stated Father Coyle in 1918.  Then and now the Mass has not stopped, the priests have not stopped saying Mass and because of technology we are able to participate and view even if we cannot attend and receive in person.  So what do we do to grow spiritually if we are not able to receive the Eucharist?. When I attended Mass before being received into the Church, I could see the Eucharist and participate in the Mass, but I couldn’t have Jesus yet.   I hungered more and more as I approached my First Communion.  This feels like that again except I know more about what I am desiring and I understand what Fr. Coyle was trying to say in 1918 before even my grandmother was born, “Holding as we do with firmest faith a belief that to many is folly, that holy mass is calvary continued... that holy eucharist is the true, real substantial body and blood, soul and divinity of God’s Son, the incarnate second person of the trinity, Jesus Christ.”  Small wonder that deprived of access to these we hope and pray fervently that the epidemic will soon pass away, that our churches may once more be thrown open to our devout worshippers. Darkness in a sense is at present over the face of the city. Fiat lux (“let there be Light”).  Do not be troubled, have faith, stay hungry for more because we are being built even in the darkness.
~ Amanda DeSalvatore