Give It Up? [Parishioner Reflection] 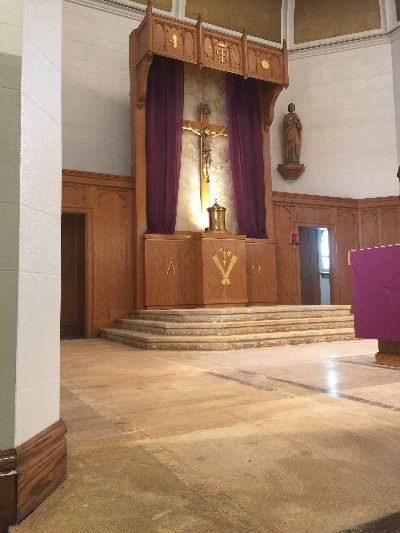 OK, what’s something that would be hard to give up, but not too hard?

That’s what goes through my head every year when Ash Wednesday comes around and it’s time to renew that distinctly Catholic tradition: Giving up something for Lent. In other words, I’ll take a little pain, but let’s not get out of hand.

In a way, the idea of doing some type of sacrifice for God but not fully surrendering to Him is the fundamental challenge for Christians here on Earth. Many of us are good at doing some of what’s truly required of us, but how many can really strip down their life and live it purely for the Lord? Especially when there are heavy obligations like work, maintaining a home and raising a family?

So, not ready to make a big Lenten commitment this year, I went with an old standby: No sugar. I believe that’s been my sacrifice every year since I joined the Church. Easy peasy. Cut out dessert and I’m golden. Look at me, Jesus!

But this year, it wasn’t enough. That trusty Catholic guilt kicked in: I know you think you’ve got the key to solving the 2019 Lenten Challenge, but do you really feel like you’ve done all you can? I’ll wait for an answer.

Stupid Catholic guilt. So, fine, I fired up the Google machine and tried to find some ideas. I can’t remember which website it was, but the idea of doing something affirmative was suggested. Mind: blown. I can do something instead of not doing something? Wow! My imagination was off to the races.

After coming up with a few ideas that, again, I deemed too difficult to do, I came up with something that follows Catholic teaching and helps the community: Picking up litter. Each day, every time I see it, I pick up litter and dispose of it. With the ice and snow melting, there is plenty of garbage on the ground, in the bushes, on the street, etc.

With my personal litter pickup program in place, I feel better about my attempts to be a good Catholic this Lent. I know I could have gone further, but baby steps I guess.

What I love most about being Catholic is learning and trying. As a relatively new Catholic (I entered the Church in 2015), I have so much to learn about the faith and I enjoy finding new aspects of it or discovering a saint. I also like trying every day to be a better Catholic. Some days I fail miserably, but I’ll never stop trying. And of course, the Sacrament of Reconciliation is always there for God to accept our contrition and wipe away those failures.

I did better this year with my Lenten intentions and I intend to aim higher next year. Maybe I’ll even retire that line: What’s something hard to give up, but not too hard.