Corpus Christi: What Does It Mean for Us? [Parishioner Reflection] 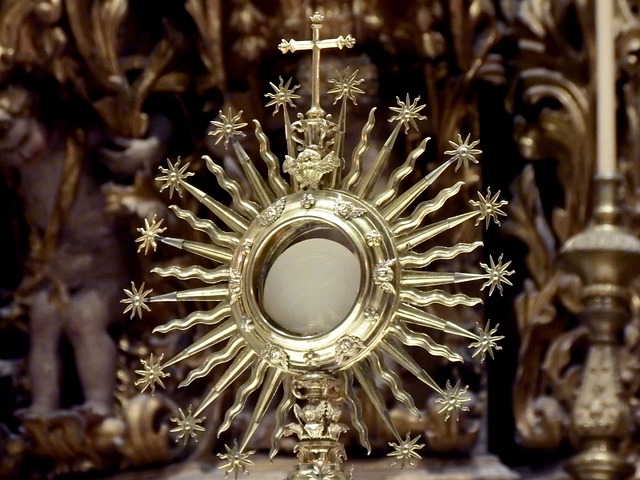 One of the greatest Catholic novelists and short-story writers of the twentieth century, Flannery O’Connor, once said of the Eucharist, “Well, if it’s a symbol, to hell with it.”

O’Connor minced no words and her comment cuts to the core of our faith and life regarding the Eucharist. As Catholics, we believe that the host and wine become the Body and Blood of Christ during the consecration at Mass. We believe that we hold Jesus Christ—the same God-Man who walked the paths of Galilee, who performed miracles in Jerusalem, and who was crucified, died, and rose from the dead—on our tongues or in our hands each time we receive him at Mass. And we know that He has been waiting for us for twenty centuries, locked in the Tabernacle, a “prison of Love,” as St. Josemaria Escriva liked to call it.

The feast we celebrate this weekend, Corpus Christi, is a wonderful occasion to take stock in what the Eucharist really means to us and what we can do to deepen our love for Our Lord, hidden behind the appearances of bread and wine.

I was raised Catholic, but growing up didn’t really have a particular devotion to the Eucharist. I went to Mass on Sundays, received Holy Communion, but I was more or less going through the motions. I rarely, if ever, prayed outside of Mass in front of the Tabernacle and I found Eucharistic adoration (the stillness, the silence) unnerving. I suppose I believed it was really Christ in the Host, but it was more of an intellectual assent than a heart-felt belief. Perhaps many, if not most, Catholics (especially in the Northeast) have a similar story to tell unfortunately.

This continued on, more or less unchanged, until my sophomore year of college. I was invited to attend an event off campus at a residence with a small chapel (and chaplain) in which the Eucharist was exposed in the Monstrance (Latin for “to show”), incense rose to the ceiling, and Eucharistic hymns were sung. The priest also guided us in prayer for about thirty minutes through preaching that helped us focus and really pray. There was food and socializing afterwards, so perhaps I came at first mostly for that, but after several weeks of attending this Friday night event, my attitude toward the Eucharist had markedly changed. I was no longer, and could no longer be, nicely indifferent.

It’s easy to say it’s just a symbol or it’s a nice thing Catholics do, but I echo Flannery O’Connor’s sentiments: if it’s just a symbol, if it’s not really Christ, our Christ, than to hell with it. We really must take a stand, pick a side.

A Muslim once learned about Catholic belief regarding the Eucharist and was absolutely floored. Peter Kreeft, a popular author and Boston College professor tells the story, which concludes with the following exchange:

Narrator: “I think I know what you mean. You can't empathize with anyone who believes something so shocking. You don't see how you could ever get down on your knees before that altar.”

Muslim: “No, I don't see how I could ever get up. If I believed that thing that looks like a little round piece of bread was really Allah Himself, I think I would just faint. I would fall at His feet like a dead man.”

How do we treat God Himself, the Creator of heaven and earth, the Redeemer of mankind, the Divine Madman, madly in love with us, when we receive Him in the Eucharist? Do we recognize His Presence when we pass by a Catholic Church? Do we take time to visit him in the Tabernacle, or to adore Him in the Monstrance?

This Sunday, after Mass, we at Holy Trinity have the perfect opportunity to strengthen our Eucharistic devotion and to bring Our Lord out of the Church and into the streets as we process with the Eucharist in the Monstrance. In doing so, we join millions of Catholic worldwide who are processing on Corpus Christi with the Body of Christ on display. And afterwards, we as a parish community have the chance to pray before him, exposed on the altar, until late in the evening Sunday night.

“Jesus, the madness of your Love has stolen my heart. You are small and helpless, so that those who eat you can become great.” (St. Josemaria)