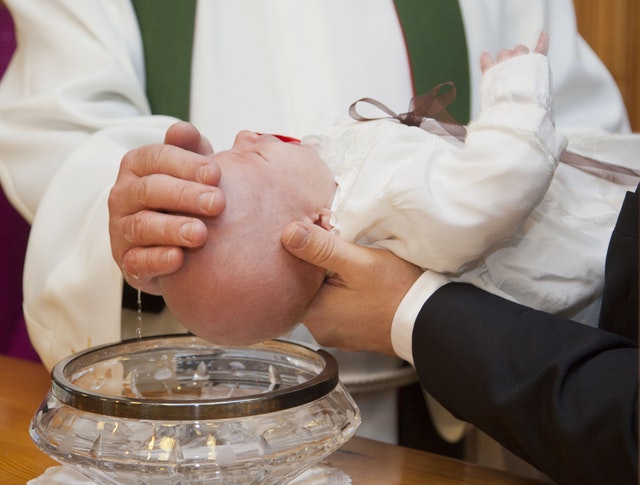 At the time I was born, my parents lived in Manhattan. They frequented a parish not too far from Penn Station named after the baptizer of our Lord. To have a little fun, the Franciscan brother who worked there would answer the telephone, “St. John—the Baptist Church!” As providence would have it, I was indeed baptized in this church (though not as a Southern Baptist). And incidentally the Franciscan friar who baptized me was named Fr. John Baptist (his religious name).

Do we remember the date of our baptism (if we’ve been baptized)? Do we celebrate that fateful day, which is in many ways the most important day of our life? In my family, we are careful to observe our children’s (and our own) baptism days. We will have a special dessert and sing “Happy Baptism Day” (to the tune of “Happy Birthday”). We also all renew our baptismal promises. A plenary indulgence is granted to anyone who does this on the anniversary of his or her baptism and meets the general conditions for a plenary indulgence.

As an aside, indulgences could be the topic of a whole other article, but in a nutshell:

“an indulgence is a remission before God of the temporal punishment due to sins whose guilt has already been forgiven, which the faithful Christian who is duly disposed gains under certain prescribed conditions through the action of the Church…” (Catechism of the Catholic Church 1471)

The Church lays out general conditions for being granted an indulgence, which include things like receiving the Eucharist and the sacrament of Confession, praying for the Pope, and having “the interior disposition of complete detachment from sin, even venial sin.” Having “complete detachment from sin” is what the Christian struggle toward holiness is all about. But it’s not easy or common, unfortunately. Thankfully one can be granted a “partial” indulgence when this condition is not met.

This year we celebrate the Feast of the Baptism of the Lord on Sunday, January 12. We began the new liturgical year with Advent and then Christmas, which focus on the coming of Christ as an infant. This feast of the Lord’s Baptism concludes the Christmas season and inaugurates “Ordinary Time” (which begins on Monday). It makes sense because Advent and Christmas present to us the Christ Child, while this Sunday’s feast invites us to contemplate His Baptism as a thirty-year-old man, beginning his public ministry.

At times, I’ve wondered why we celebrate Christ’s baptism in such a way (it even has its own mystery of the Rosary). After all, Christ had no sin and did not need to be baptized. In fact, his cousin, St. John the Baptist, “would have prevented him, saying, ‘I need to be baptized by you, and do you come to me?’” (Mt. 3:14). But it makes sense: Christ had no personal need of baptism, but is our model in all things. It is fitting that He was baptized and revealed to the people through the descending of the Holy Spirit as a Dove as well as the voice of the Father: “This is my beloved Son, with whom I am well pleased.” (Mt. 3:17).

One simple moral of the story is get baptized! Have your children baptized as soon as possible after birth (ideally within 3-4 weeks or less). Encourage non-Catholics who are not baptized and non-Christians to seek this sacrament of sacraments. “Go therefore and make disciples of all nations, baptizing them in the name of the Father and of the Son and of the Holy Spirit, teaching them to observe all that I have commanded you.” (Mt. 28:19-20a). Thus are Christ’s last words on earth before his Ascension. And put in even starker terms, our Lord also added, “He who believes and is baptized will be saved; but he who does not believe will be condemned” (Mk. 16:16).

Through baptism, we become children of God. What a tremendous reality it is to contemplate: I am a son of God! You may come across someone who is the son or daughter of a wealthy business owner or executive. Or perhaps the child of a high-ranking military official or politician. Think of the confidence they often have, the skip in their step: Daddy is the president of this or the commander of that. Yet that is absolutely nothing compared with what we have as daughters and sons of God.

Consider often your own divine filiation, your divine sonship or daughtership. So many mistakes and sins can be avoided simply by remembering often that you and I are daughters and sons of God! The way that I walk, talk, dress, react—do my actions show to others that I am a child of the King? Keeping a strong presence of God throughout the day is a sure way to grow closer to Him and to avoid the many snares and pitfalls that surround us.

One final point, though much can be said about being a child of God. God is our Father, so please know that you can approach Him at at any time, running to him like the prodigal son whose Father comes out to meet him in a loving embrace. Or even as our Lord, Jesus Christ, approaches the Father in the Garden of Gethsemane, asking that some suffering be removed, yet also asking that “Thy Will be done” and not mine. God is a loving Father, not a deadbeat dad. He will take care of His children if they only ask!

“The most beautiful exhortation that we can address to each other is to always remember our Baptism....If we are true to our Baptism, we will spread the light of hope—Baptism is the beginning of hope, that hope—of God, and we will be able to pass on to future generations the meaning of life.” (Pope Francis, August 2, 2017 General Audience)