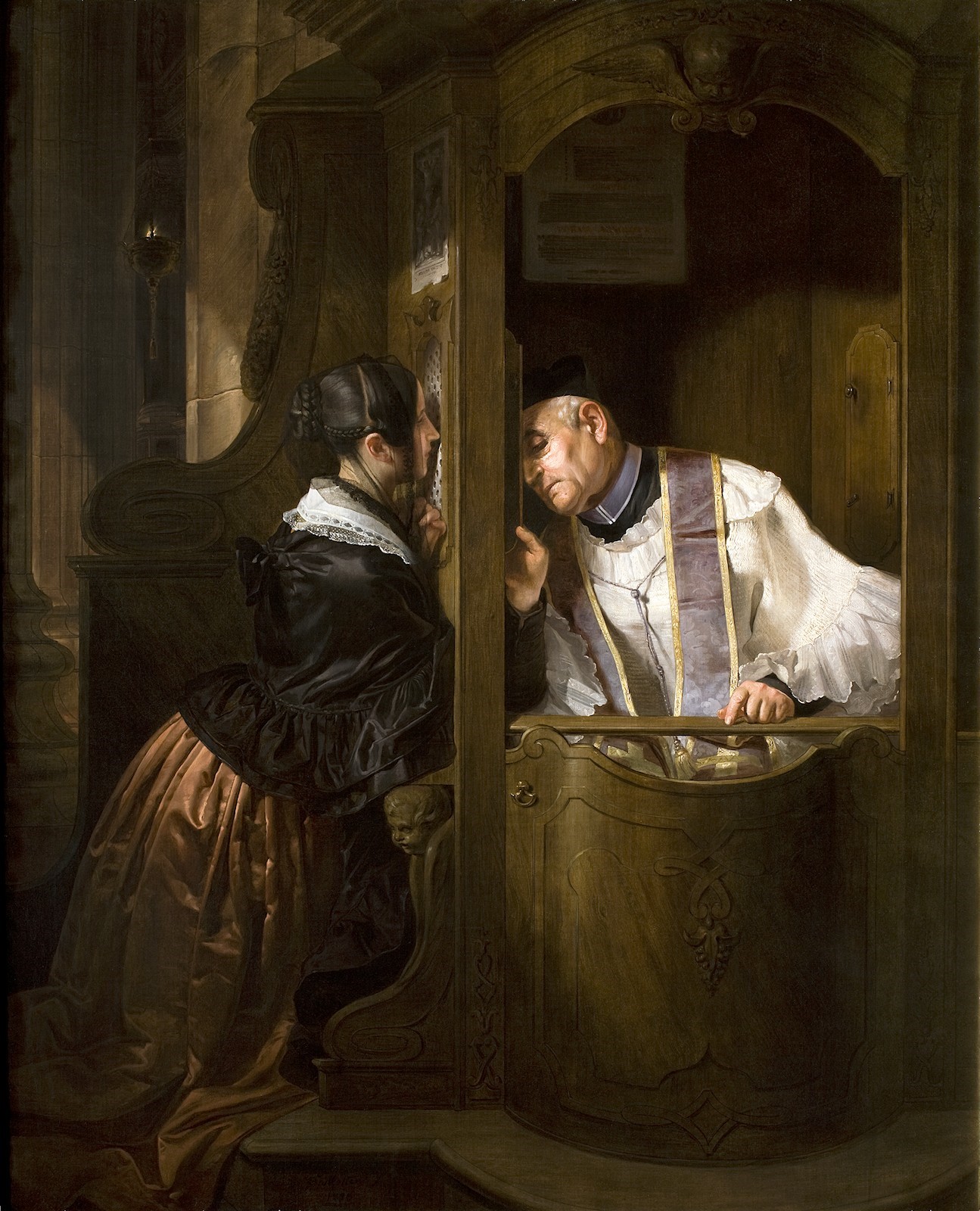 Resolutions have been made, the ball has dropped in Times Square and Auld Lang Syne has played, all signs that we have ended our old year and started a new one. Since a new year has arrived and subsequently a new decade, I’ve been seeing a lot of 10-year challenge pictures showing up in social media that compare the “then us” with the “now us” with reflections on what we’ve learned this last decade.  I started to reminisce and tried to discover my own pictures from ten years ago to see how far I’ve come.  It’s not a bad thing to look back and see where we were and how we have changed.  So often we see these times like the “past me” the “old me" and we treat our new year as a time to reflect and then move forward with a better, wiser version of ourselves.
It was only ten years ago when I went to my first confession.  My husband and I were about to be confirmed in the Catholic faith after a long faith journey and we were preparing for our first sacraments.  I had to confess a lifetime of sins and mistakes as I prepared by a careful examination, prayer, and meditation on my then 27 years.  We planned to meet the priest in the Tuesday of Holy Week, but before we entered the Church I remember sitting in the car with my husband by my side and my thoughts were tempted by this phrase, “you don’t have to go in, you don’t have to do this.”  It was very difficult to convince myself that I needed confession, after all, I had gone my whole life without it.   The phrase was nagging me to allow the annoyance and difficulty of the act of confession to keep me from the gift of reconciling.  I knew that confession was necessary and a gift.  As we sat and silently contemplated our next steps, that phrase was repeating over and over in my head.  I suddenly became very nervous.  The phrase that repeated was very hard to ignore, however, I was ready and I knew that after confession we were only days away from receiving our First Holy Communion.  It was time, so together we walked toward the doors of the Church I took a cleansing breath and entered and suddenly the phrase stopped.  When I went into the confessional and knelt down, I unfolded my paper with the sins I had written down from all the stages of my life.  Some had been with me most of my life, others, had surfaced during my examination but after I confessed them I felt for the first time a sense of weight lifted off of me and I felt a peace I had never known.  It was my “Aha Moment” of my entire faith journey because it was life-altering.  I was able to leave that confessional a new person shedding that old version of myself, the version I had been dragging around like dead weight.
After this initial “first confession”  and for a while after, we had the practice of attending confession every week to get used to this new gift in our faith, but whenever I go it’s a practice that continues to show me my path.  I can admit that as time has gone by it isn’t always easy getting to confession or even wanting to go.  The journey seems arduous and taxing, that’s actually when I know I need to go.  When it is no longer easy I’m reminded that I’m not on the right path anymore.  As a family, we try to encourage our kids who have received this sacrament to go often and we make sure that occasionally we go as an entire family, all in line like a caravan.  I found that over time it’s okay and even encouraging to make it a practice to offer or ask others to go to confession with you because and it’s good to encourage others to do the same.  One day recently, a good friend of mine was really struggling with something and asked if I would take her to confession after we talked.   What she didn’t know is I didn’t want to go.  I had some sins I was struggling with and they were repeats and I was feeling weary about going again for the same thing, but through her encouragement and friendship I went and it was a good confession and I received really good advice about this repeat sin.  That friend got me to confession when I needed it and we should be doing that for each other.
"Though you should name infinite treasures, none of them is comparable to a genuine friend...He is knit to him with a union of the soul that affords unspeakable pleasure...I speak of genuine friends, men of one soul, who would even die for each other, who love fervently...For him, he prays for the same things as for himself. I know one, who called upon holy men on behalf of his friend, besought them to pray first for him, and then for himself. So dear a thing is a good friend, that times and places are loved on his account. For as bodies that are luminous spread their radiance to the neighboring places, so also friends leave a grace of their own in the places to which they have come."

This Sunday the Church celebrates Epiphany, the physical realization that God had become Man and fulfilled the prophecies from the Old Testament.  On Epiphany, we may think of the three wise men, Caspar, Balthazar, and Melchior or we may even identify with the “Aha moment” that realization that epiphanies represent.  These men studied the stars, saw the signs and read the prophesies.  They knew something was worth traveling for and maybe they would find the Saviour.  They were not religious men, they may have been kings, and they traveled together to the unknown.  They met some temptations along the way including Herod, the evil King, that was threatened by the news of the “King of the Jews”, and then they were guided to Jesus and gave the gifts worthy of not only a King but the King of All Kings.

“If the Magi had come in search of an earthly King, they would have been disconcerted at finding that they had taken the trouble to come such a long way for nothing. Consequently, they would have neither adored nor offered gifts. But since they sought a heavenly King, though they found in Him no signs of royal pre-eminence, yet, content with the testimony of the star alone, they adored: for they saw a man, and they acknowledged a God.”

These men that we remember show us quite a bit about our own faith today, especially for the gift of the Sacrament of Reconciliation.  We all journey in our faith, some of our journeys are difficult and full of obstructions, but God has given us the gifts of the Sacraments and our King is waiting for us to come and kneel before Him acknowledging our sins. Jesus offers us Himself, Body, Blood, Soul, and Divinity in the Eucharist and all we have to do is prepare ourselves for this gift by receiving another gift, the Sacrament of Reconciliation.  Confession is the best way to prepare for the Eucharist and it actually guides us to the King.  Our Epiphany is revealed in the Eucharist and guided by Confession.  One thing is certain, whether we are going every week, we have a ten-year spread, or maybe we are going to see Jesus for the first time, like those Magi so many years ago, may we be willing to shed our old selves in the Sacrament of Reconciliation for our King.

“After confession, a crown is given to penitents.”