A Faithful Friend Is a Sturdy Shelter [Parishioner Reflection] 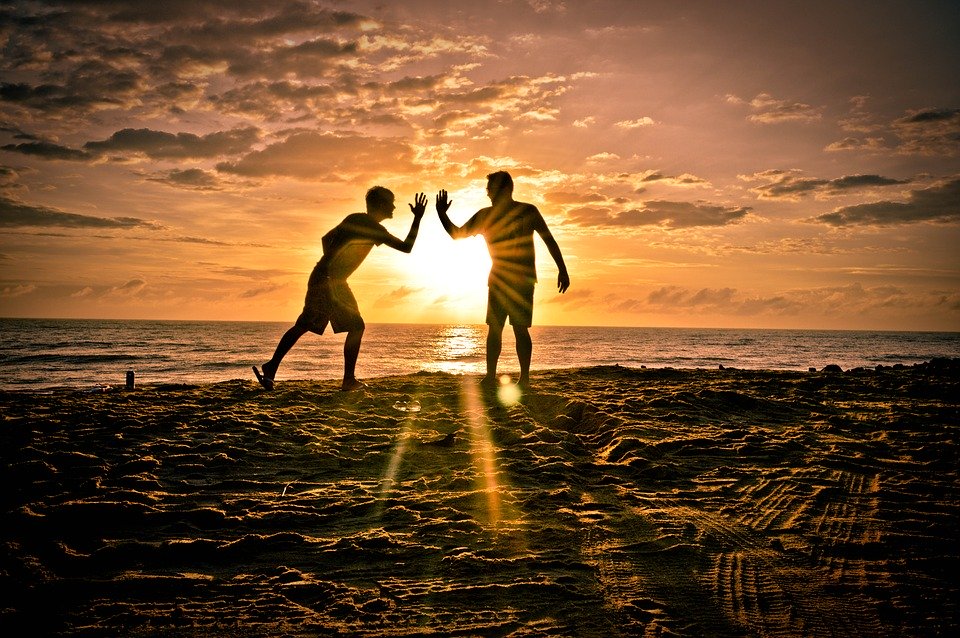 It was a Friday night in late September, nearly fifteen years ago. My memory is not precise but still vivid. I had accepted the invitation to an informal gathering of friends in the common area of one of the college dorms. A popular game among us was Apples to Apples, not so much for the pursuit of winning but for the pursuit of entertainment: to see who could be sillier or more amusing. It was a loose group of perhaps a hundred students who all had one thing in common: our Faith. We all kind of knew each other a little bit, but of course, each had his or her group of close friends.

A freshman who lived at that dorm walked in late. I had never met him before, but my other friends spoke very highly of him. I exchanged a few words, but he was on his way out of the building. Over the years that followed, though, a friendship began to blossom. I tell this story, because my friend, Victor, was later the best man at my wife’s and my wedding and the godfather of our first child. Even though we haven’t lived is the same city (or even state) since graduation, we’ve visited each other from time to time and stayed in touch by email, text message, and video chats. In fact, we just spent over an hour a few nights ago catching up via Skype.

Whether your friend lives near or far, whether it is a friendship of a long or short time, whatever the particulars, friendship is a natural phenomenon that’s part of our DNA, part of who we are as human beings. We were made to have friends. “It is not good that the man should be alone; I will make him a helper fit for him” (Gen 2:18), says the Creator. We were created to be friends with our Creator and we were born to live in community with those around us as friends.

Friendship is often poorly understood in today’s American culture (and beyond the US as well). It is helpful to look at the ancient thinker, Aristotle’s, writing on types of friendship. Most friendships start simply as a “friendship of utility.” You have something I need, and vice versa, so we are associated as “friends” in order to get what we lack. The world of business revolves around these kinds of relationships, and of course, when everyone is treated justly and charitably, there is nothing wrong with them.

However, we need to move beyond friendships of mere “utility.” The next stage for Aristotle consists of friendships of pleasure. Think of teammates on a sports team or fellow pursuers of the same hobby. We could also classify “drinking buddies” as this kind of friend. Again, these friendships are lacking firm roots and can be transient. While they have the potential of leading to a solid friendship over time, something is missing.

Yet thankfully, Aristotle highlights for us a third kind of friendship: friendships of virtue. Friends of this kind share the same values and these values boil down to moral principles, to virtues. Friends of this kind see eye-to-eye on what true virtue is and that it’s worth pursuing. Though they may not share the same religious outlook (after all Aristotle was a pagan), they are men and women of good will who can forge solid and lasting friendships.

Does this mean, then, that we shouldn’t try to befriend those with whom we don’t share the same moral outlook? Yes and no. It does mean that it will be very hard or impossible to form a deep and authentic friendship with such a person. However, it doesn’t mean that that person should be shunned. In fact, we should pray and offer up sacrifices for the person’s conversion to the truth and be available to help guide the person to a life of virtue. Miracles do happen.

One example that comes to mind is St. Augustine and his mother, Monica. Monica was a Christian who prayed that her non-Christian son, Augustine, would see the error of his ways and convert. She prayed for 17 long years and finally, when Augustine was 31, he was baptized and believed. Monica’s persistent prayers produced, in a sense, two saints: herself and the one for whom she prayed. Let’s keep this in mind when tempted not to pray for those who need conversion in various ways.

So what are some practical ways we can foster more friendships (of all kinds and with all kinds of people)? First and foremost, we have to “get out there” and both meet new people regularly and keep up with the people we do know. There is an image I like that describes the Christian as “spread open like a fan” rather than closed up, hidden beneath a bunker.

There are many ways to meet new people, whether through our professional responsibilities, hobbies/interests, our children’s schools and extracurricular activities, and of course religious groups and our parish itself. One wonderful example of that at Holy Trinity in Cohoes is the “Faith and Fellowship” series offered to adults of all ages after Mass each Sunday.

But what about keeping up with friends we do have already or getting to know new friends we’ve just met? Be sure to persevere in inviting them to get together, whether for coffee/tea, lunch, or perhaps having a family over for dinner.

Sometimes time is short, so another idea is to invite friends to join you on fun activities you’re already planning to do, such as taking the kids to the park, seeing a sporting event, or going skiing or ice-skating. This builds your friendship while not needing to wait for a blank spot on your calendar to make it work.

Much more could be written about friendship and there are some worthwhile resources available on the topic. Besides Aristotle, I recommend C.S. Lewis’ classic work: The Four Loves as well as a lesser-known author’s short work entitled, Whatever Happened to Friendship?

We interact with many people each and every day. Let’s find a way to authentically befriend those we meet and spend time with, loving them with Christian love, and praying for them. Thus, God will bless us with true friends, which, as we know, are hard to come by.

A faithful friend is a sturdy shelter:

There is nothing so precious as a faithful friend,

and no scales can measure his excellence.

A faithful friend is an elixir of life;

and those who fear the Lord will find him.