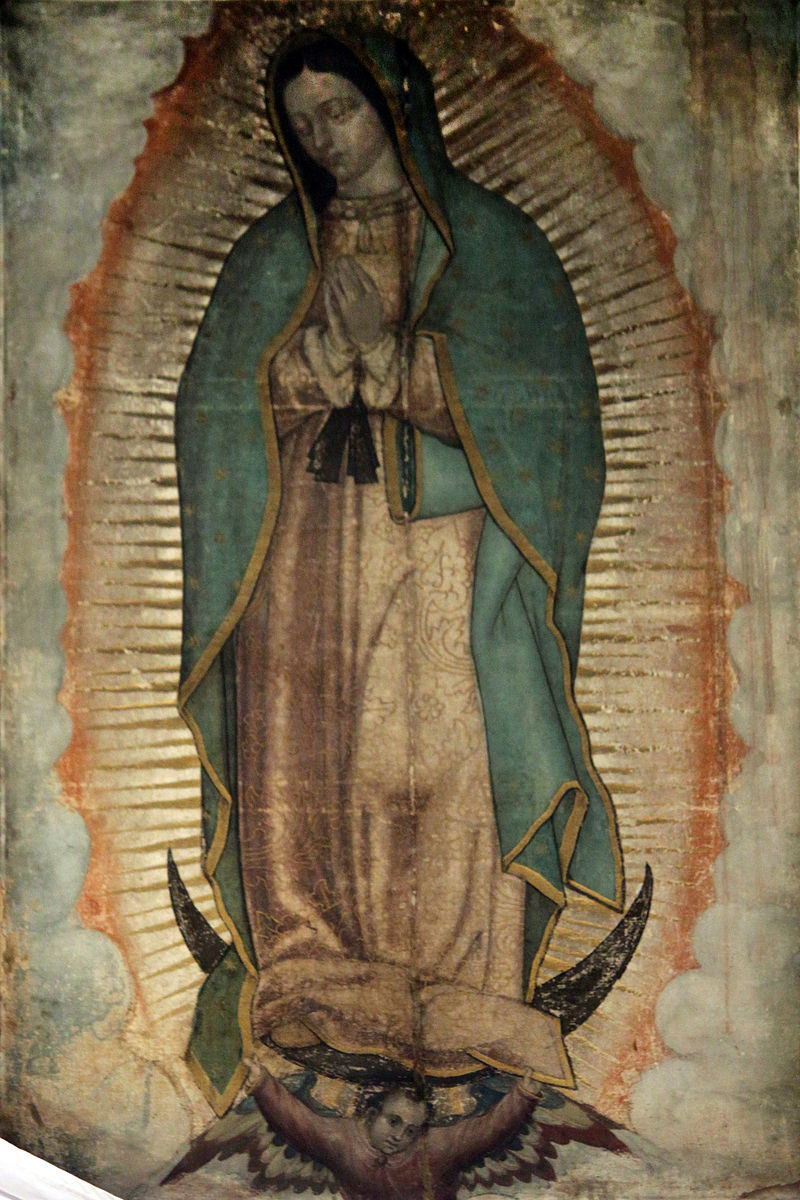 December 12th is the Feast of Our Lady of Guadalupe. I won’t repeat the story of this Marian apparition here, as you probably know it already. You can find details online as well, such as here. Instead I’ll share a few random things that interested me as I read up on the subject. I hope they will interest you.

First, I should mention that the Catechism of the Catholic Church clarifies that visions and private revelations, though they can be approved by the Church, are secondary to the revelation of Jesus Christ handed down to us from the Apostles:

"The Christian economy, therefore, since it is the new and definitive Covenant, will never pass away; and no new public revelation is to be expected before the glorious manifestation of our Lord Jesus Christ." Yet even if Revelation is already complete, it has not been made completely explicit; it remains for Christian faith gradually to grasp its full significance over the course of the centuries” (CCC 66).

So the appearance of Our Lady to St. Juan Diego does not add to the contents of the deposit of faith, but it can help us to grow in our understanding of it.

The image of Our Lady of Guadalupe on St. Juan Diego’s tilma measures four feet eight inches. I read this the other day and wouldn’t have thought much of it. But a friend, who is just slightly taller than that and is also with child, happened to mention at a dinner party that she feels connected to the Blessed Virgin Mary due to this height similarity. My wife then mentioned that some saints have referred to Mary’s smallness. For example, St. Maximilian Kolbe calls the Blessed Virgin “our dear little, little mother” (see e.g. Fr. Michael Gaitley’s 33 Days to Morning Glory, p. 111). Before, I would have taken these types of statements to refer to the Blessed Virgin’s humility, but now I don’t see any reason not to imagine that she is also physically small. Perhaps, in God’s providence, Mary’s spiritual littleness is matched by physical littleness. I also think of St Teresa of Calcutta, who stood five feet tall, but had a strength and love that inspired people around the world.

Reports online differ slightly in some details, but here is the basic story: A drug addict in his twenties, Juan José Barragán Silva, living in Mexico City, had been abusing alcohol and marijuana with a friend. On May 3, 1990, three days before Juan Diego was beatified by St. John Paul II at the Basilica of Our Lady of Guadalupe in Mexico, Juan José came back to his mother’s apartment and, in his intoxicated state cut himself with a knife and claimed he did not want to live anymore. Then he jumped from the third story balcony in an apparent suicide attempt. His mother managed to grab his legs to prevent the fall for a moment but could not hold on. He fell head first 30 feet to the pavement below. During the fall, his mother suddenly thought of Juan Diego, and asked him to intercede for her son: “Give me a proof … save this son of mine! And you, my Mother, listen to Juan Diego.” According to one report, after a few moments on the ground, blood coming from his head and bystanders thinking he was dead, he suddenly stood up and ran back toward the stairs and embraced his mother and asked her forgiveness. He prayed one Our Father and then blacked out. They rushed him to the hospital. But miraculously he fully recovered in three days and was released from the hospital in ten days, after an event doctors said should have killed him or at least left him permanently handicapped. That third day, the day he was healed, was May 6, 1990, the day Pope St. John Paul II beatified Juan Diego.

Besides the dramatic nature of the physical healing that occurred, it also touched me to think of the relational, psychological, and spiritual components. How many broken families do we encounter in our communities? How many adult children are estranged from their parents? How many children and adults are affected by drugs, legal or illegal? It is to such a difficult situation that St. Juan Diego responded. That St. Juan Diego would respond to this mother’s request reminds me of Our Lord’s personal care for us in all the particular difficulties we face in modern society.