What Catholics Have to Say About Dr. Martin Luther King, Jr. [Parishioner Reflection] 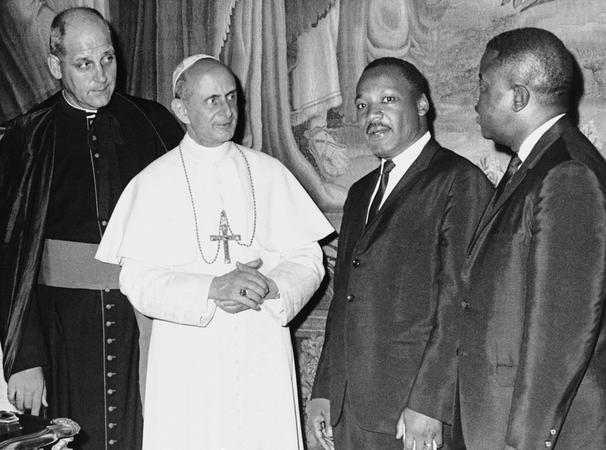 Martin Luther King Jr. Day is Monday, a time for Americans to reflect on his remarkable life. Dr. King’s leadership in confronting injustice and using nonviolent protests throughout the mid-‘50s and ‘60s is still as inspiring and powerful today as it was throughout the Civil Rights Movement.

From his instrumental role in the Montgomery Bus Boycott, to organizing the March on Washington and forging ahead arm in arm across the Edmund Pettus Bridge from Selma to Montgomery, Martin Luther King Jr. believed in the “fierce urgency of now” on the journey to enact change. His legacy lives on.

Dr. King came to prominence as a Baptist minister, but many of his writings and teachings have themes that are familiar to practicing Catholics. The first and most obvious example was his goal of upholding the dignity of every human life by battling discrimination based on skin color. Rejecting racism is a necessary Catholic value, because we cannot be authentically pro-life if we value some lives over others.

Bishop Robert Barron has identified three aspects of Dr. King’s life that serve as a model for our time: his commitment to provocative non-violence, his ability to bring religious discourse into the public square, and the rhythm and beauty of his language. Specifically, Bishop Barron says Martin Luther King Jr. had a unique ability to “turn the other cheek,” but without accepting the violence being done to African-Americans; he used his background as a Christian preacher to bring religious language to the broader public, maybe most famously during his “I Have a Dream” speech where he quoted from Isaiah and tied it to language in the Declaration of Independence; and he used soaring rhetoric and dazzling alliteration to capture the hearts, minds and imaginations of those listening to him speak.

Taking a different tack, Father Michael Kwatera, a monk of St. John’s Abbey in Collegeville, Minn., writes: “What Jesus tried to do in his ministry was to bring all people together to share God’s banquet of mercy and love…That is why Dr. King, through his ministry and witness, tried to bring all people, black and white, together at one table: literally, as he physically tried to end segregation at lunch counters throughout the South, and spiritually as he united clergy, religious and lay persons of all religious denominations in his efforts for equality and justice.”

This is an important point, because a central tenet of Dr. King’s work was to pull all faiths together to pursue justice. The photo atop this article shows him meeting at the Vatican with Pope Paul VI in 1964. He also enlisted local Catholic leaders – along with Jewish leaders and clergy from various Christian denominations – to participate in the 1965 march from Selma to Montgomery. As a National Catholic Register article recounts, “Early in 1965, Edmundite Fr. Maurice Ouellet, pastor of St. Elizabeth's African-American mission in Selma, answered a knock at his door. He was surprised to see King standing on the front step. ‘The Negro people tell me there is one white man in Selma who is black,’ King said by way of introduction, ‘and I want to meet him.’"

In 2018, on the 50th anniversary of his assassination, the United States Conference of Catholic Bishops released a statement marking the tragic occasion. The bishops wrote, in part, “In his final speech on the night before he died, Dr. King openly referenced the many threats against him, and made clear that he would love a long life. But more important to him, he said, was his desire to simply do the will of God. We can best honor Dr. Martin Luther King and preserve his legacy by boldly asking God – today and always – to deepen our own commitment to follow His will wherever it leads in the cause of promoting justice.”